This is the latest literature on Palmitoylethanolamide (PEA). The full literature content can be downloaded here. Below is only a short excerpt. 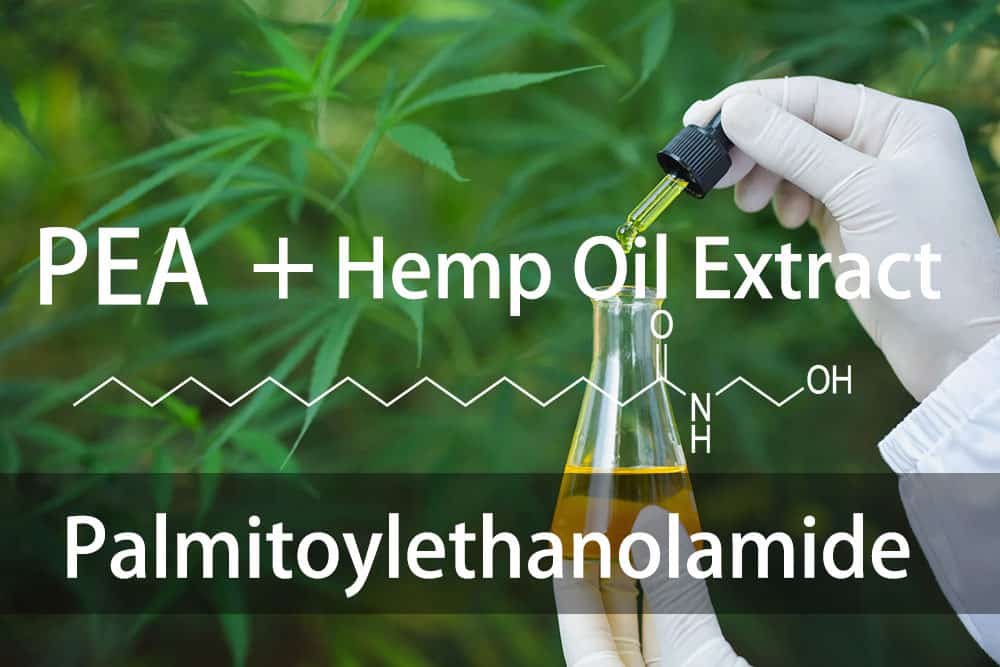 For many people who suffer from chronic pain, the use of products derived from hemp – i.e., cannabis types with low Δ9 -tetrahydrocannabinol content (Δ9-THC) – is becoming a more common form of self-medication for their condition. However, preclinical and clinical evidence to support this practice remains very limited at best.

We studied the effects of hemp oil extract that can be taken orally. We tested this by giving 10 mg to 50mg doses and mixed it with PEA. The formalin test was used as a measure for inflammation levels while chronic constriction injury (CCI) measured pain sensitivity.

Our research found that hemp oil extract, when taken alone, had a modest effect on pain-related behavior. However, the combination of sub-effective oral doses increased this effect to significantly greater than additive levels. Transcription of IL6 and IL10 in spinal cord tissue was significant at 7 days after CCI surgery which was alleviated by either HOE or the combination therapy with PEA as well.

Pharmacokinetic experiments show that coadministration of HOE enhances and prolongs systemic exposure to PEA. These findings lend support for the use in combination with PEA as a pain relief treatment, especially when treating acute or chronic pains.

There is an unmet need for safe and effective analgesic therapies. Current pain management strategies rely on three main classes of drugs: opioids, gabapentinoids, and non-steroidal anti-inflammatory agents that produce adequate relief in a fraction of patients who take them [44]. The use of these medications are associated with dose-limiting side effects; such as tolerance, abuse liability, or gastrointestinal toxicity which means there is still much work to be done before we can come up with better treatments. Cannabis has been shown to have the ability to reduce chronic pain in adults. One of its main compounds, Δ9-THC, is a likely factor for this effect that was uncovered by both preclinical and clinical studies.

Synthetic cannabinoids imitate Δ9-THC, a natural cannabinoid that is created by the human body. Synthetics interact with CB1 and CB2 receptors in both neural cells as well as immune cells throughout your body to provide pain relief for chronic conditions such as migraines or arthritis. The presence of CB1 in brain areas involved in the control of mood, reward, and cognition underlies the psychotropic properties that limit its use as a therapeutic agent.

In addition to Δ9 -THC, cannabis contains more than 140 phytochemicals that share a similar terpenophenolic nucleus but do not productively interact with either CB1 or CB2 receptors. There is evidence that one such compound- cannabidiol (CBD), might reduce pain without causing intoxication, and its analgesic efficacy and mechanism remain unclear [9]. Cannabis also contains other non-psychotropic cannabinoid molecules whose contribution to the plant’s ability for alleviating discomfort may be far from negligible [17], including THCV which has been shown in animal studies to alleviate anxiety by binding directly onto an endocannabinoid receptor called vanillor type 1 on the surface of brain cells.

Indeed, cannabis varieties that contain less than 0.3% Δ9 -THC – conventionally referred to as ‘hemp’ – are becoming increasingly popular as self-medication for pain and other health conditions. The enactment of the U.S., which effectively legalized the cultivation and sale of hemp in 2018 has only increased this popularity amongst consumers seeking a natural alternative medication with fewer side effects from opiates or opioids used to treat chronic or acute pain; however, we still know surprisingly little about how effective these products are on patients dealing with certain types of ailments like muscle spasms related back strain resulting from heavy lifting at work.

Palmitoylethanolamide (PEA) belongs to a class of signaling lipids that includes the endocannabinoid anandamide and the satiety factor oleoylethanolamine. A large body of animal and human studies indicate PEA produces safe, effective analgesia which depends on its ability to engage with nuclear receptors such as peroxisome proliferator-activated receptor α(PPARα).

In the present study, we investigated the efficacy of a full-spectrum hemp oil extract (HOE), either alone or in combination with PEA, in two mouse models of acute and chronic pain: the formalin and the chronic-constriction injury tests. The results show that hemp oil extract exerts modest antinociceptive effects when administered alone, whereas the combination of HOE with PEA results in a substantial alleviation of pain-related behaviors. Pharmacokinetic studies show that this unexpected synergistic interaction may be accounted for, at least in part, by the ability of HOE to prolong the exposure and lifetime of PEA in circulation.

To assess the antinociceptive effects of HOE, we first used the formalin test as a model of injury-induced spontaneous pain [13]. A single dose of the extract (10, 50 and 100 mg-kg-1) was given orally to male mice 1 h before intraplantar injection of formalin. As expected, [13], the chemical irritant produced an immediate nocifensive response consisting of two temporally distinct phases of licking and flinching of the injected limb (Fig. 1, A and B; phase I: 0–10 min; phase II: 15–60 min). On post formalin day (PFD) 7, the acute pain event gave way to edema in the injected paw (Fig. 1, C) and hypersensitivity in both ipsilateral and contralateral paws (Fig. 1, D and E). 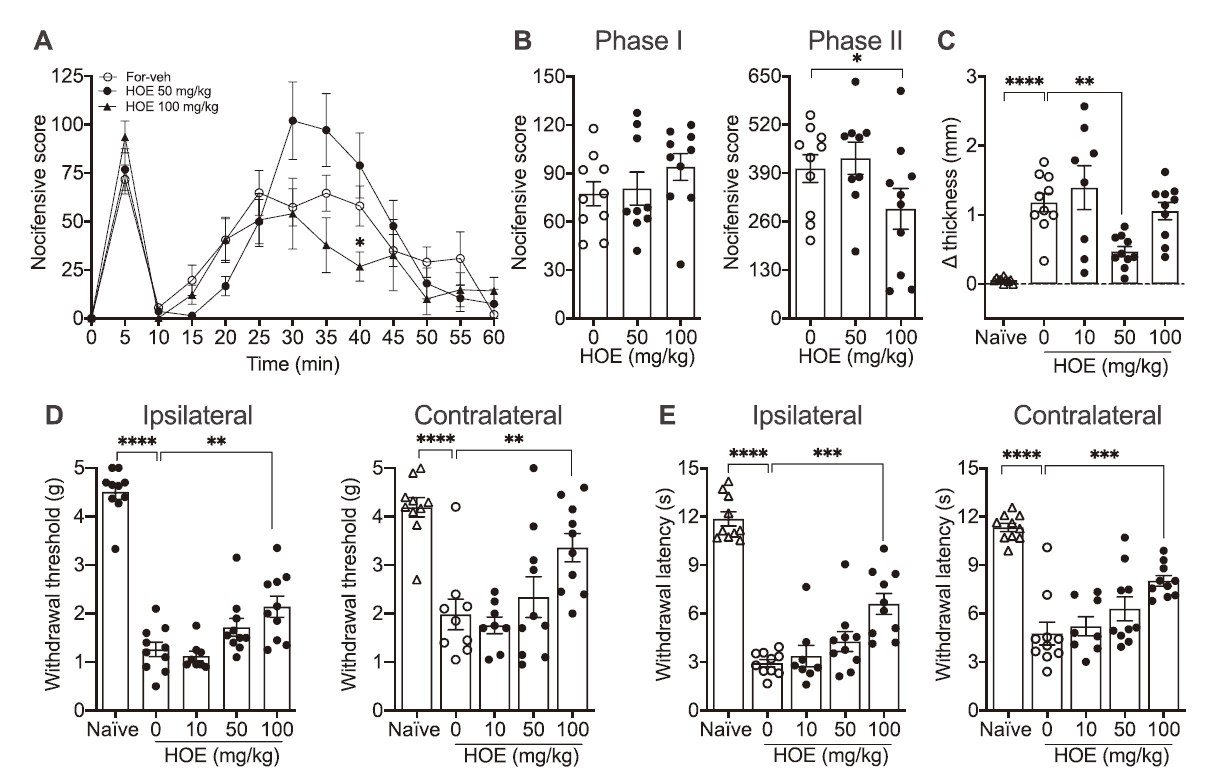 Fig. 1. Effects of a single dose of HOE on formalin-evoked acute and persistent nociceptive behaviors. (A) Time-course of the acute nocifensive response to formalin (1%, v/v). (B) Cumulative score of the phase I and phase II of the acute nocifensive response. (C) Paw thickness (injected paw thickness minus non-injected, in mm) at PFD7. (D) Formalin-evoked mechanical allodynia and (E) heat hyperalgesia to both ipsilateral and contralateral paws at PDF7. Data are expressed as mean ± S.E.M  (n = 8–10 per group) and analyzed by two-way (A and B) or one-way (C, D and E) ANOVA followed by Dunnett’s test for multiple comparisons. *P < 0.05,
**P < 0.01, ***P < 0.001 and ****P < 0.0001 vs. Sham or Vehicle controls.

Next, we produced peripheral neuropathy in mice by ligating their right sciatic nerve, which resulted in the development of mechanical allodynia and heat hyperalgesia in the operated limb (Fig. 2). On day 7 after surgery, we administered HOE by the oral route 1 h before testing. The results show that administration of a single dose of HOE (100 mg-kg-1) had no effect on either heat hyperalgesia or mechanical allodynia (Fig. 2, A and B; P > 0.05 vs. vehicle), whereas a 7-day treatment with the extract (100 mg-kg-1) decreased heat hyperalgesia by 33% (Fig. 2, C and D; P < 0.01 vs vehicle). 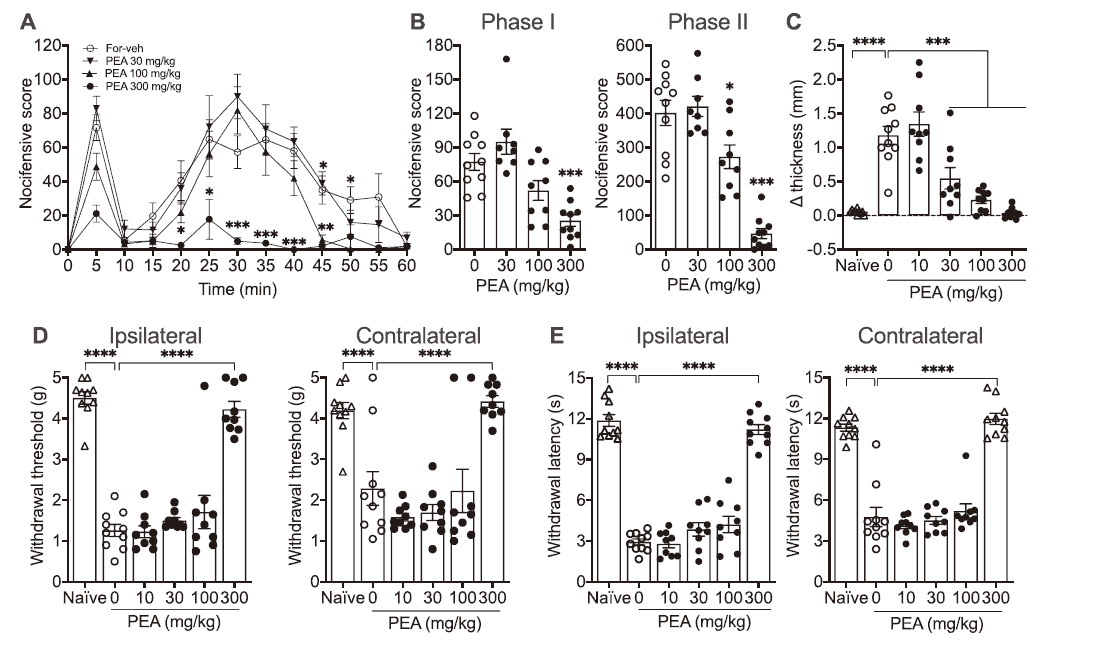 Fig. 3. Effects of a single dose of PEA on formalin-evoked acute and persistent nociceptive behaviors. (A) Time-course of the acute nocifensive response to 1% formalin. (B) Cumulative score of phase I and phase II of the acute nocifensive response. (C) Paw thickness (injected paw thickness minus non injected, in mm) at PFD7. (D) Mechanical and (E) heat sensitivities to both ipsilateral and contralateral paws at PDF7. Data are expressed as mean ± S.E.M (n = 8–12 per group) and analyzed by two-way (A and B) or one-way ANOVA (C, D and E) followed by Dunnett’s test for multiple comparisons. *P < 0.05, **P < 0.01, ***P < 0.001 and ****P < 0.0001 vs. Sham or Vehicle controls.

The two highest doses of PEA (100 or 300 mg-kg-1) were administered orally to neuropathic mice once daily for 7 consecutive days. The treatment reversed mechanical allodynia (Fig. 4, C) and heat hyperalgesia (Fig. 4, F), supporting prior studies indicating that there is no tolerance to the antinociceptive effects of PEA [24].

3.3. Antinociceptive effects of combinations of HOE and PEA

Next, we tested whether HOE and PEA might interact when given in combination. Our results did not allow us to determine a median effective dose for HOE in either of the two experimental pain models, which made it impossible to evaluate the pharmacodynamic interactions between PEA and HOE by isobolographic analysis. Instead, we opted for a combination subthresholding approach which is a valid, effect-based strategy to investigate the biological activity of combinations of two or more compounds [14]. We administered combinations of sub-effective oral doses of HOE (50 mg-kg-1) and PEA (30 or 100 mg-kg-1) 1 h before formalin (1% v/v). The results show that the HOE (50 mg-kg-1) and PEA (30 mg-kg-1) combination did not affect Phase I of formalin-evoked nocifensive behavior but reduced Phase II by 32% (P < 0.01 vs. vehicle) (Fig. 5, A and B). There was no effect on paw edema (Fig. 5, C)

3.4. RT-qPCR measurements
3.5. Pharmacokinetic profiles of HOE, PEA, or their combination
3.6. Effects of HOE alone or in combination with PEA on endocannabinoid levels

There is an unmet medical need for safe and effective analgesics. Our results suggest that hemp oil extract is modestly effective when administered alone, in treating acute and chronic pain. Surprisingly, however, the extract strongly enhanced the analgesic effects of palmitoylethanolamide, an endogenous lipid mediator, such that the combination of the two compounds exerted greater-than-additive antinociceptive effects in two mouse models of pain. This synergism may be harnessed therapeutically to produce adequate pain relief without causing undesirable side effects.

The full article on Palmitoylethanolamide and hemp oil extract exert synergistic anti-nociceptive effects in mouse models of acute and chronic pain can be viewed here.