Mangiferin is a xanthone, which is some of the most potent antioxidants known. They are thought to be more potent than both vitamin C or vitamin E and are sometimes unofficially referred to as super antioxidants. Xanthones are heat‐stable molecules. Mangiferin, generally called C‐glucosyl xanthone, is widely distributed in higher plants where it provides protection to producer plants against different forms of static and dynamic stresses, including ingress of pathogenic microorganisms.

Without careful research, we never knew that mango is a tasty fruit with many health benefits, mainly due to its ingredients. 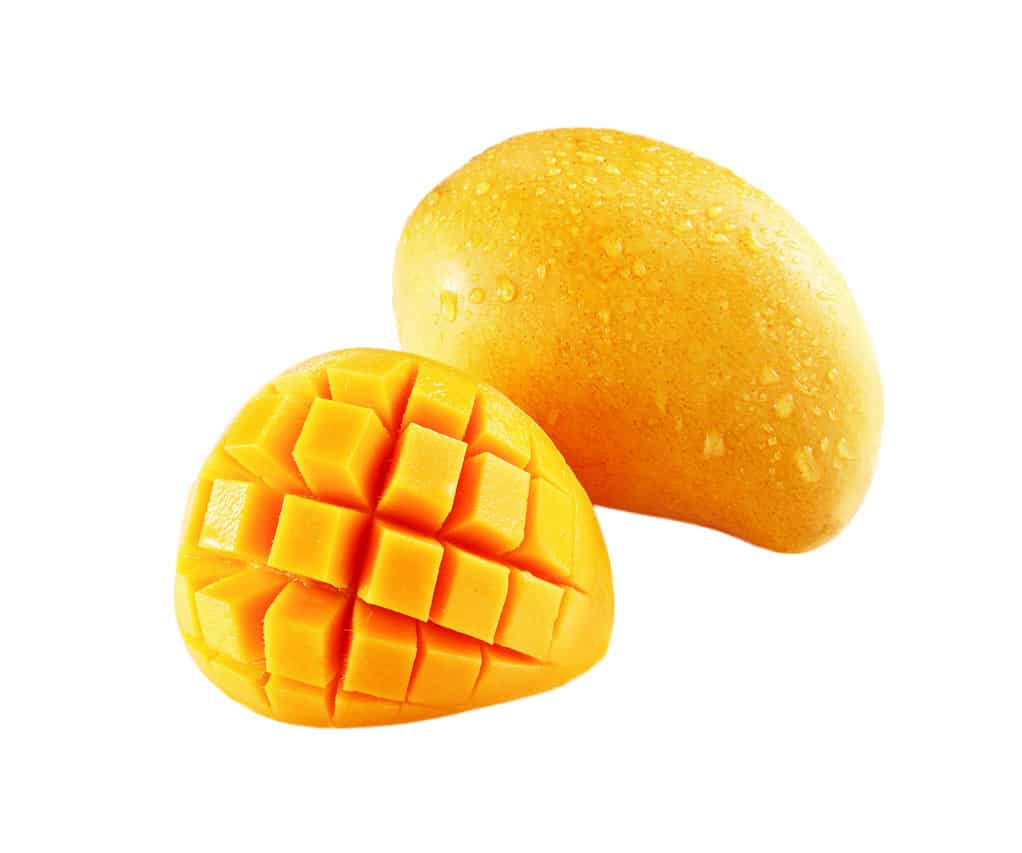 What is the source of Mangiferin raw material?

Mangiferin is a natural plant polyphenol of the C-glycosylxanthone structure. It has various pharmacological activities. It was found in many plant species, among which the mango tree (Mangifera indica) is one of the primary sources. Mangiferin is found in the bark, fruit, root, and leaves of mango, which is now grown in about 100 countries around the world. Mangiferin is also present in some medicinal herbs, influencing their therapeutic and preventive properties, and in honeybush (Cyclopia sp.), a popular South African herbal tea. Mangiferin dissolves well in water so that it can be easily extracted into infusions and decoctions.

What’re the benefits of Mangiferin?

We know that people who are stressed or tired lack enthusiasm, and most feel exhausted and hopeless. What they want is a constant increase in energy to help improve physical function and attention, keeping the brain focused, alert, and emotional at its best.

As a result, people use caffeine to boost mental energy and attention, and billions of cups of coffee are consumed worldwide every day to help people cope with stress and fatigue. At the same time, many exercises and intelligence products contain high doses of caffeine to improve alertness and strength. However, caffeine is addictive, and most people suffer from adverse side effects from excessive caffeine consumption, such as hand tremors, anxiety, irregular pulse, insomnia, and nausea, as well as many problems during withdrawal. Mangiferin, on the other hand, activates brain waves and increases long-term synergies in much the same way as caffeine, but it does not selectively stimulate brain activity. Mangiferin provides sustained mental and physical energy that keeps you focused without any of the side effects of caffeine.

2. Mangiferin has a powerful effect in helping improve the performance of the exercise watch.

It can exert continuous energy and increase the output power. Because Mangiferin is an alternative to caffeine, decaffeinated side effects are not banned as stimulants.

After a 15-day supplement of a combination of peanut shell extract (luteolin) and mango leaf extract (Mangiferin), a group of healthy male college students from Spain showed sustained improvements in athletic performance, including increased brain oxygenation and muscle oxygenation for at least 48 hours. The 12 students received either a low or high dose combination of a supplement: 50 mg daily PHE plus 140 mg/d MLE and 100 mg Mangiferin, or 100 mg/d PHE plus 420 mg/d MLE and 300 mg mangiferin. Both low and high doses were positively correlated with enhanced exercise recovery, although high doses were closely correlated with lower brain oxygenation.

For those who like the flavor of mango, eating fruit may be a more attractive option. A review of mango’s anti-inflammatory properties published in Functional Foods in Health & Disease offered the following conclusions: “A large number of studies established the immunomodulatory and anti-inflammatory potential of Mangiferin. Significantly, Mangiferin at different doses increased ATP levels, which can thereby intensify strength, stamina, vitality, and vigor. Overall, mango, especially mango leaf extract enriched in Mangiferin. . . may have tremendous potential in mitochondrial energy homeostasis, endurance, and exercise performance.”

3. It can help people with type 2 diabetes lower their blood sugar.

Experiments have shown that Mangiferin inhibits alpha-glucosidase and alpha-amylase, which play a crucial role in the regulation of blood glucose levels. Due to the slow-down of glucose metabolism, Mangiferin can be used as a potential hypoglycemic agent due to its enzyme-inhibiting properties.

In another group of experiments, after oral administration of Mangiferin and its glucoside, there was no change in blood glucose levels in normal mice. Still, it could reduce the blood glucose concentration in KK-Ay mice with spontaneous diabetes, and the insulin level in serum also decreased. Intraperitoneal injection of Mangiferin can significantly reduce the amount of glycosylated hemoglobin and serum creatine phosphokinase CPK caused by oxidative damage in diabetic rats.

Thus, Mangiferin could be a boon for future type 2 diabetes treatments.

4. It can help protect the liver and gallbladder.

Currently, 15-30% of the western population suffers from non-alcoholic fatty liver disease (NAFLD), while 6-25% of the Asian population suffers from it. 75 to 100 million people in the United States die from this disease. Meanwhile, obesity and type 2 diabetes are risk factors for the development of NAFLD, and the global economic cost of treating NAFLD is enormous. 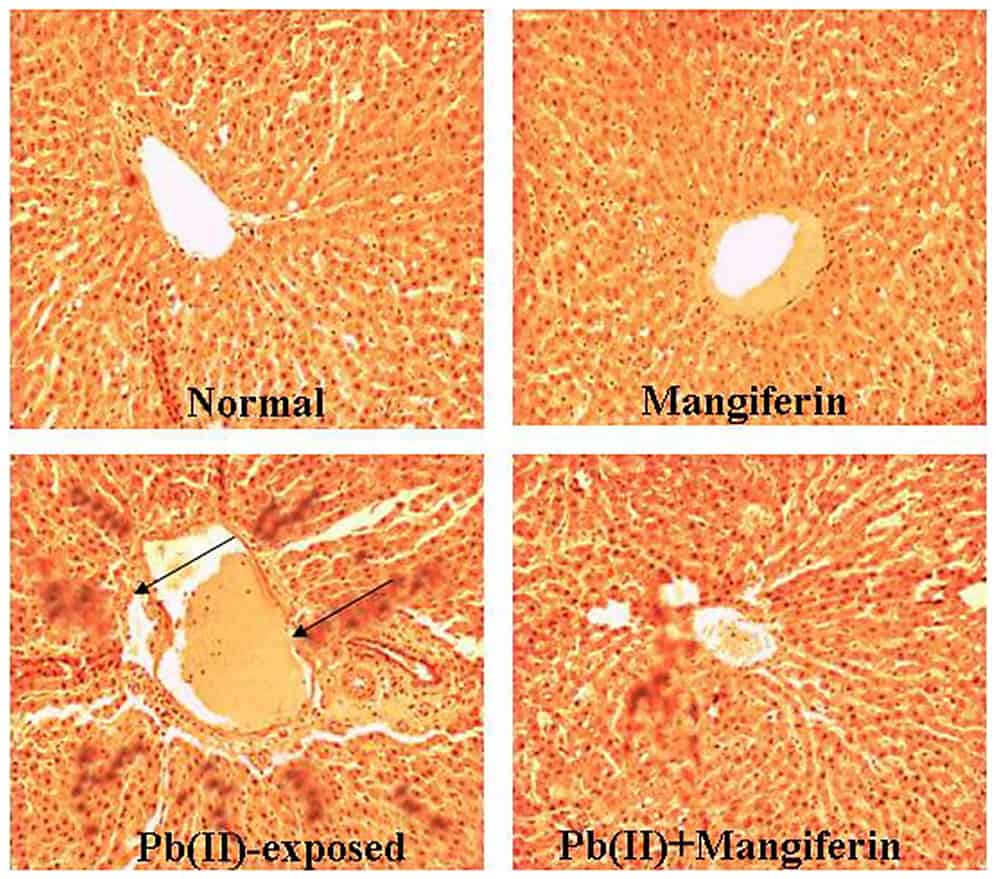 Mangiferin: liver section from animals treated with mangiferin only;

Mangiferin is mainly extracted from mango leaves, and Its primary role is antibacterial, anti-inflammatory, helping improve cognitive and athletic performance, and so on. African mango extract is extracted from mango seeds, and the primary function is to lose weight and suppress appetite.

The extraction sources are different. Mangiferin is mainly extracted from mango leaves in subtropical regions such as Guangxi, and the raw materials of African mango extract are only in tropical areas such as Cameroon in Africa.