Diacylglycerol is a trace ingredient of natural plant oils and an endogenous intermediate of body fat metabolism, and it is recognized as a safe (GRAS) food ingredient. In recent years, dietary diacylglycerol has been widely concerned with the effect of reducing visceral fat, inhibiting weight gain, and reducing blood fat.

Diacylglycerol is a natural component of edible vegetable oils. Its content in edible oils generally does not exceed 2%, such as about 2% in olive oil, about 1% in soybean oil, and about 0.8% in rapeseed oil. Scientific research has found that diacylglycerol content of over  27.3% has a significantly better effect on blood pressure, body fat, and etc.

Diacylglycerols are structural lipids in which a hydroxyl group in triglycerides replaces a fatty acid. 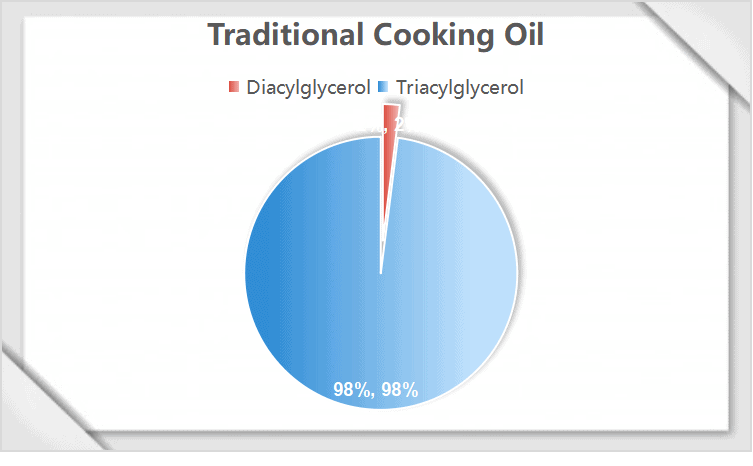 Triglycerides stored in the intestines have fat. The belly is getting bigger and bigger, and more fat is around the waist. Excessive precipitation of triglyceride in the liver can cause fatty liver. It is terrible that excessive intake of triglycerides caused diabetes, stroke, high uric acid, four high diseases. However, diacylglycerol has no such side effects.

How does diacylglycerol work?

In 1993 K.Hara first found the diet as reducing serum triglycerides in experimental rats.

TAG in the gut, terminal fatty acids due to lipase are lyzed to 2-mono glycerol (MG) with free fatty acids (FA). FA and 2-MG were again rapidly synthesized into TG(neutral fat) in small intestinal epithelial cells, an  d that neutral fat that not use as energy accumulates as body fat. However, most DAG broke down into 1-MG and fatty acids that can no longer synthesize fat. Moreover, they eventually decomposed into water and carbon dioxide release through the β-oxidation pathway.

Thus DAG improves lipid decomposition and energy utilization in the small intestine. At the same time, it is difficult to increase the neutral blood fat after eating DAG so that if continuous consumption of DAG can reduce body fat accumulation.

In the choice of flaxseed diacylglycerol, be sure to choose the one with high diacylglycerol content; usually, the higher the content means, the better the health benefits.

Olive diacylglycerol is a process in which part of the triglyceride enzyme in olive oil is converted into olive diacylglycerol by biological enzyme processing. Diacylglycerol can produce beneficial effects on human health. It is a trace component of natural vegetable oil and the endogenous intermediate product of fat metabolism in the body.

It is recognized as a safe (GRAS) food ingredient. Diacylglycerol content of 40% and 80%, we can buy according to their actual situation, 40% of diacylglycerol is suitable for daily family cooking; 80% diacylglycerol is ideal for people with chronic diseases and obesity.

Diacylglycerol inhibits fat accumulation by accelerating the rate of fatty acid β -oxidation. The β -oxidation process, which oxidizes fatty acids to form carbon dioxide and water and eventually forms energy, is not involved in the resynthesis of triglycerides. Compared with healthy people, the effect of diacylglycerol on increasing energy expenditure and fat oxidation is more significant in overweight people.

Animal and human experiments have shown that long-term intake of diacylglycerol can control weight gain and reduce visceral fat content and other physiological effects.

Scientific studies have found that postprandial hyperlipidemia is one of the risk factors for cardiovascular and cerebrovascular diseases.

Because the molecular structure of diacylglycerol is slightly different from that of conventional oil (triglyceride), the digestive products of diacylglycerol are challenging to synthesize fat molecules in small intestinal epithelial cells quickly. Instead, they are oxidized to provide energy.

Therefore, intake of diacylglycerol can significantly reduce both postprandial and fasting lipid levels.

Many domestic and foreign scientific literature shows that long-term taking of diacylglycerol can improve and regulate various chronic diseases, such as high uric acid, high blood lipid, weight loss. Diacylglycerol has a significant effect on burning visceral fat, so eating diacylglycerol can reduce kidney fat and dredge the passage of uric acid discharge to achieve the effect of lowering uric acid.

Diacylglycerol is a fat that does not have any significant side effects. In some cases, it may cause digestive problems and headaches but in general, the digestion of DAG is similar to regular oils which are generally well tolerated by most people. Diacylglycerol may cause gastrointestinal discomfort for a few, but not worse than cooking oil.

The daily recommended amount of diacylglycerol is 25ml for consumption and 5ml for drinking.

In China, the announcement is less than or equal to 30g per day.

In other countries, to lose weight and reduce body fat, consume 10 to 45 grams of diacylglycerol in the diet instead of other fats, usually 8 to 9 grams each time, 2 to 5 times a day.

Where to buy bulk diacylglycerol oil?