What is lithium orotate? 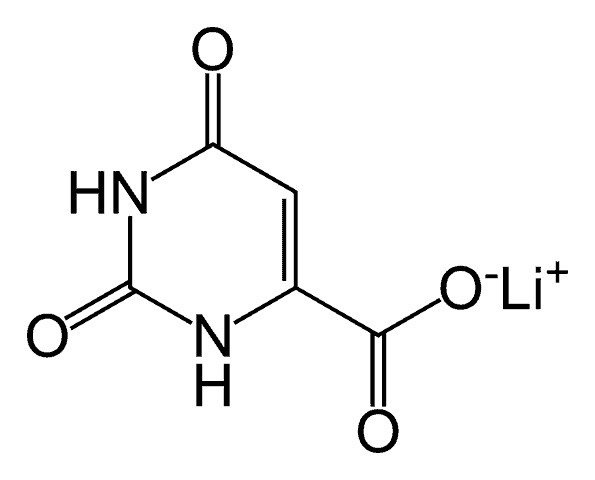 Raw material of lithum orotate (CAS number 5266-20-6), is in the form of white to off-white crystalline powder. The specification from Cima Science Co., Ltd is 99% min.

Let’s also compare these lithium salts in the following parameters: 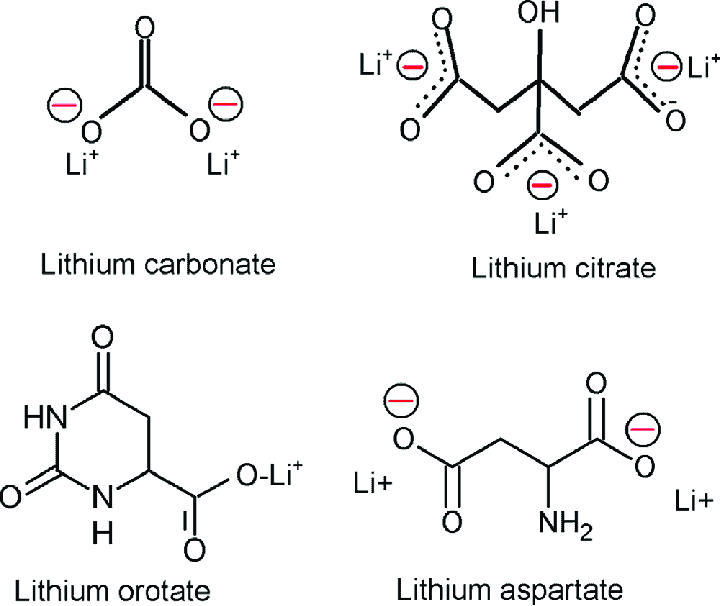 Lithium Chloride has a very large search volume on google per month. However, most chloride form are reagent grade for lab research purpose only. Therefore, we will not discuss it here.

Like Lithium orotate, lithium aspartate is also regarded as a dietary supplement ingredient, but not so many supplement companies use it.

Then, why is lithium orotate so much more popular then lithium aspartate?

The reasons may be due to toxic side effects caused by lithium aspartate.

Aspartate is regarded as an excitotoxin. Excitotoxins are substances that bind to a nerve cell receptor and cause damage via over-stimulation. Excess Lithium aspartate may result in excitotoxic reactions in sensitive individuals, and the results include headaches, CNS issues, vascular problems, etc. People who are sensitive to the food additive monosodium glutamate (MSG) have more of a chance of a bad reaction to lithium aspartate. It would be a good idea for them to take lithium orotate instead.

Lithium carbonate and lithium citrate are drugs while lithium orotate is dietary supplement.

Due to the poor bioavailability,high dosages of lithium carbonate and citrate of lithium are normally required (2,400 mg-3,600 mg per day) to achieve the desired benefits. In contrast, 130 mg lithium orotate is able to supply about 5 mg elemental lithium per capsule. 5 mg lithium orotate supplement is good enough to have great effects on mood and brain health.

High dosages of lithium carbonate must be taken in order to obtain a satisfactory therapeutic effect. Unfortunately, these therapeutic dosages raise blood levels so high that they are close to toxic levels. Consequently, patients taking prescription lithium carbonate or lithium citrate must be closely monitored for toxic blood levels. Serum lithium and serum creatinine levels of prescription lithium-treated patients should be monitored every 3-6 months.

However, lithium orotate, the combination of lithium and orotic aicd, has no such problems.lithium orotate is more bioavailable than the carbonate and citrate forms, and is capable of delivering natural lithium straight into the brain cells that need it most. In adition, lithium orotate has no significant side effects and no need for lithium orotate to be monitored for the dosage.

Mechanisms of Action of Lithium Orotate

According to Wikipedia, the specific biochemical mechanism of lithium action in stabilizing mood is unknown. Lithium exerts its effects at multiple levels beginning with clinical changes to mood by counteracting mania and depression and diminishing suicidality. Evidence for the effects of lithium on cognition from neuropsychological and functional magnetic resonance imaging studies point overall towards cognitive compromise; however, evidence for this has been mixed. Structural imaging studies have provided evidence of neuroprotection with increased grey matter volumes, in particular in the amygdala, hippocampus and prefrontal cortical regions in lithium-treated patients. Changes to neurotransmission that have clinical impact may be explained through increased inhibitory and decreased excitatory neurotransmission in lithium-treated patients. At the intracellular level, lithium influences second messenger systems, which modulate neurotransmission and facilitate cellular viability by promoting anti-oxidant defences, decreasing apoptosis, and increasing neuroprotective proteins. 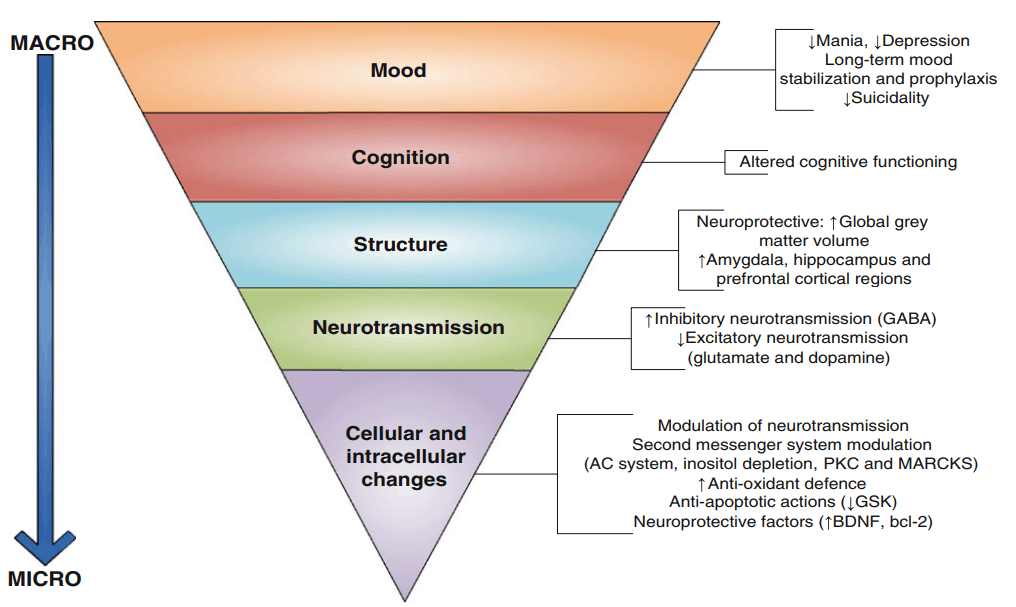 However, three primary mechanisms have been identified over the last two decades for the wide-ranging neuroprotective effects of lithium on the brain and nervous system:

Brain-Derived Neurotrophic Factor (BDNF) is commonly referred to as “Miracle Grow for the brain” because it increases neurogenesis. Neurogenesis is the                  growth of new neurons, giving your brain a much-needed “biochemical upgrade” while getting off opioids. BDNF also provides powerful antidepressant and

Lithium orotate is a natural dietary supplement that can be used in small doses to manage stress and support a more positive mood.

Lithium orotate was originally discovered to treat manic depression (now known as bipolar disorder), it has been used for a long time to stabilize mood and treat a wide range of mood disorders.

Lithium orotate enhances the synthesis and release of the happy hormone serotonin. At the same time, the orotate salt also reduces the stress hormone norepinephrine.

Lithium orotate is able to help people by lowering the brain’s sensitivity to norepinephrine receptors. It practically blocks the production of this well-known neurotransmitter that affects our mood. Because of these mood-stabilizing effects, lower doses are being explored in people with anxiety. Lithium has been shown in studies to calm manic behavior associated with anxiety, bipolar disorder, and even attention deficit disorder (ADHD).

Lithium orotate is popular in some nootropic formulas. Nootropics are able to enhance memory and other cognitive functions.

Several scientific studies have shown that lithium orotate supplement can boost gray matter in the human brain, block the release of beta-amyloid and boost NAA. A further protective mechanism attributed to lithium orotate is decreasing the over activation of a brain cell protein called tau protein that also contributes to neuronal degeneration as does the formation of neurofibrillary tangles. People with different kinds of brain injuries and problems may expect improvement in their cognitive functions.

Lithium orotate may be helpful for alcohol cravings. One study found that when patients who craved alcohol were given lithium orotate, they were able to maintain their sobriety longer with minimal side effects. Scientists have replicated these findings in other studies, as well.

Generally speaking, there are many lithium supplements and drugs on the food and pharmaceutical market. It is lithium Li+ that plays the key functional role. The general dosage for elemental lithium is 5mg.

The molecular weight of Li is 6.941, accounting for 4% of Lithium orotate(162.03). To supply 5mg elemental lithium, the dosage of lithium orotate is 125mg.  So you will find that lithium orotate in most lithium supplements is colse to 125mg. Some formula may be 120mg, some may be 130mg, and there won’t be much difference.

Many supplement brands who want to try lithium orotate in their supplement formulas are concerning this question.

However, dosaging is very important. Lithium is very effective at low dosage at 5mg. Do not exceed the recommended dose of your health professional. Consult your physician for more information.

Lithium orotate, for the time being, has a small market, and may be not available from factories or suppliers in China. Since 2018, Cima Science Co., Ltd has been manufacturing raw materials of lithium orotate powder in large quantities. 2 tons inventory is available. If you need a price quote and COA (certificate of analysis) or detailed specification sheet, please feel free to send us an email below.